I received to test a little board based on the Cypress CY7C68013A.
Here some notes about this experience.


The board arrived in a small padded envelop, without any cable, documentation and software.
Quite useless due the totally lack of information.
Looking over the net didn't return too much information, there are very few seller of this product.

On some Ebay auctions for this board, there were present some links to the schematics and software, however these links seems not working.

Being only in Chinese is not really helpful to understand what is going on, also if it appears a "button" is available, but it is  disabled (gray one).
Also the download material available on these links, is information-less.
Are basically 3 rar files named 0000.rar, 1111.rar and 2222.rar, not really self explaining.
I had to contact the vendor of the board, and he initially answered back giving me the link to the same URL I discovered not working.
After another round of contacts, the vendor sent me the files via email.

As I mentioned earlier, the software associated to this board, is coming in three "anonymous" RAR files :

This file contains other rar files, some of them named in Chinese and thus with wrong/illegal names in English.
Fortunately, at least under Linux, almost all in the end was accessible.
Without entering too much in detail here some contents, for what I can say (no documentation is present) :

This file contains a single zip file, that in the end contains a MSIA loader (Microsoft stuff)

Also this file contains a single zip file that contains some USB drivers for Windows.

To better organize the received material, I created a new tree , changing some names to better identify the pieces :

The schematic present in the received files, it just illustrates the board "as is", without any indication about how to use it for the Logic Analyzer function.
Doing some tests using the program Logic under Windows (1.0.21), it seems that the 8 inputs used are located in the port B, where PB0 is the Input 1, PB1 the input 2 and so on.
The pins not connected to a probe input, reports an high value (+5V), i.e. seems the inputs are pulled up.
Also from the tests it seems the board can support max 8Mhz as input frequency.
The possible selection of the program Logic (12 Mhz, 16 Mhz and 24 Mhz) are not working.
The program automatically reduce them to lower values if selected.
From some tests, it appears that all the selections of frequency are working, however the combination of the frequency and the  number of samples can  cause the program to "scale down" the frequency selection.
When the jumper close to the Eeprom is removed, the board is not seen anymore as Logic Analyzer but as Cypress development board.
Probably in the Eeprom are stored the codes and/or firmware for the Logic analyzer.

The analyzer arrived without any cable, so I looked around to see what was the best approach.
Some sellers of the board (and similar one) sells a cable that can be connected to the board, but I didn't like it for the price, the endless waiting time (from Honk Kong) and the appearance.
So I decided to buy the cable  used by the Logic original hardware and build a simple adapter board to connect it.
I bought the cable from Sparkfun (TOL-09225).

Here a couple of pictures of the adapter board to connect the cable to the logic analyzer. 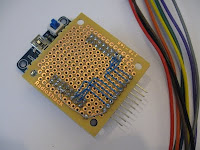 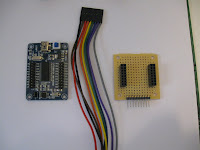 
Exploring the received files, I didn't find a single piece of documentation about how to set up both software and hardware, the logic analyzer functionality.

From some comments and the nature of the code, I think that the package (hardware and software) is a clone (hack ?) of the USBee LX series of USB instruments .
There is also another Logic analyzer code, the Logic, from Saleae , that exist also for Linux .
So in order to see if the board is actually working, here are some required steps :

One for the Windows code in the received files, is from the Saleae, Logic, version 1.0.21.
The program requires some .Net libraries, I suspect the ones received with the rest of the code.
However the installation checks and installs them from the Microsoft website directly.
The .Net framework installation takes some time, so it is mandatory to have patience.
After restarted the computer and completed the installation, it is possible to launch Logic, after connecting the board.
The board is recognized and the program is able to read the signals.
Status : working

However some info I found suggest that the board should give more information.
Status : NOT working

The Ubuntu (32 bit) version tested is the 1.1.9.
There is no need to install the code, however in the Driver directory there is an udev entry and a small script capable to copy the udev rule under /etc/udev.
So far the board is recognized (plug in) but on I have a not identified "access" problem.
lsusb recognize the board as "Lakeview Research".

I installed also the new version of Logic, the 1.1.4, under Windows.
The installation was successful, however like the Ubuntu version, is not full recognizing the board, aborting immediately after the board is connected to the USB.
A collateral effect I had so far, is that the board is not working anymore also with the 1.0.21 version of Logic until the new Logic program 1.1.4 is dis-installed and the computer restarted.
Status : NOT working (not yet tested with the update)

On the Saleae website is also present an older version of Logic, but greater than the one present in the received files from the board vendor.
The version, only for Windows, is called 1.0.33 (present also in this website) and is working.
Status : working


The other included Logic analyzer application is the USBee Suite, version 1.5.7.
The installation went well, no errors (on my Win XP machine) but the code it crash as soon as it starts, after the splashscreen.
Doesn't matter to have the board connected or not to the computer.
Status : NOT working

The board is working basically only with the version of Logic 1.0.21 and Logic 1.0.33 under Windows and with limitations (max. available frequency).
The lack of information make really complicate to try to study the reason of the failure with newer version of the Logic or Linux version, but I think has to do with a lack of information to the USB udev.
Also in order to use the board is necessary to :

For the price is sure an interesting object, but the lack of information and the reduced capabilities if compared with "official" products can reduce the usefulness of the product.

If having reduced capabilities, like be forced to use Windows instead of Linux and the limit in the frequency input, having to build the case for the board, play with the received material and lack of information (that this article tries to fix), then it can make sense to spend the money.

Otherwise I think the full price of the "originals" like the Saleae Logic are more than well justified.

TheFwGuy
A Firmware developer in Arkansas who love to read, who love music, curious by nature, free thinker by learning.